Why do we sweat?

Humans are the sweatiest animals on the planet! Sweating is an essential and natural biological process of keeping you cool, an advantage that distinguishes us humans apart from the rest of the animal world. While most animals were naturally designed for heat retention, we humans were designed for heat loss. Because we cool by sweating rather than panting, we can stay cool at speeds and distances that would overheat other animals, thus we can outrun almost any animal!

According to Harvard evolutionary biologist, Daniel E. Lieberman, a human could even outrun a horse in a 26.2-mile marathon on a hot day!  (BTW the horse is the second sweatiest animal)

According to the International Hyperhidrosis Society, there are 2 to 4 million sweat glands distributed all over our bodies! Why so many?

According to Dr. Nina G. Jablonski, an American Professor of Anthropology at Pennsylvania State University, it’s often said that our large brains are what made it possible for us to evolve from ape to human. But those big brains could never have developed if we didn’t have exceptionally sweaty skin. There was a tremendous takeoff in human evolution about two million years ago when primates who could no longer be called apes appeared in the savannahs of East Africa. These early humans ran long distances in open areas. In order to survive in the equatorial sun, they needed to cool their brains. Early humans evolved an increased number of sweat glands for that purpose, which in turn permitted their brain size to expand. As soon as we developed larger brains, our planning capacity increased, and this allowed people to disperse out of Africa.

So, be glad you sweat, otherwise you might still be an ape!

There are two types of sweat glands:

Eccrine - the most numerous type that are found all over the body, particularly on the palms of the hands, soles of the feet and forehead. Eccrine sweat glands help cool the skin and keep your core temperature from overheating.

Apocrine - develop in areas abundant in hair follicles.  Mostly confined to the armpits (axilla) and the anal-genital area. They typically end in hair follicles rather than pores. They produce a thicker fluid which comes in contact with bacteria on the skin and produces an odor.

For people suffer from hyperhidrosis, the sweat glands are generally overactive, producing more sweat than is necessary. The overreaction is further amplified by stimuli such as emotional and physical stress and also certain foods like alcohol or caffeine. 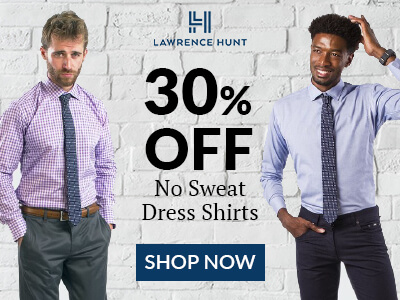 Try a Thompson Tee For Yourself RISK FREE FOR 30 DAYS

We gladly accept returns or exchanges on all opened or used Thompson Tee shirts up to 30 days from purchase date so feel free to wear it, wash it and try it